Hi. This is going to be a rather quick informal review of my new Lenovo z470 laptop. I'll divide it into at least 2 parts since it might be a long document. Again, this is informal so dont expect too detailed discussions as I will tend to concentrate on points that I deem important.

Part 1.a : Introduction and Outside appearance

Ok I bought this in the lenovo store in SM city, san Fernando Pampanga. I have a 7 year old IBM laptop and the backlight is starting to fail. I already had it fixed once but it cuts out from time to time so I guess its time to replace it. Cash, it cost me Php 32,500 pesos.

Freebies are a keyboard protector, a shoulder bag, windows home premium, Open office 3, 4 gig ram and a package. The package either consists of a rather low quality wired mouse and headset (intex brand) or a 4 gig flash drive/sd card. Various brands of flash drives are available but the SD card (micro sd plus adaptor) is transcend brand. Unfortunately its only SDHC class 2. But I aded 200 pesos to upgrade the 4 gig sd card into an 8 gig one. You can also pay more to get other versions of win7 OS.

Specs are quite OK.
You can get the official PDF flyer here.

My personal requirements for a laptop were not high. Pretty much for surfing and office work and maybe for downloading overnight. Any decent CPU and GPU would do. However I insisted on a large HD, a large screen and 4 gigs ram for snappy performance. But since on this laptopo, the CPU is pretty OK and it has CUDA as well as Intel Quick Sync, I might use it for video transcoding. For games, I have an old desktop with a core 2 duo and a geforce 560ti.

I chose lenovo because it has a good reputation and I used to have an IBM. Plus, they opened a store in my local SM which gave good prices and freebees.

As for initial impressions, I'm pleased. The back of the lid is glossy but that makes it into a fingerprint magnet. Screen is clear and nice. No dead pixels. 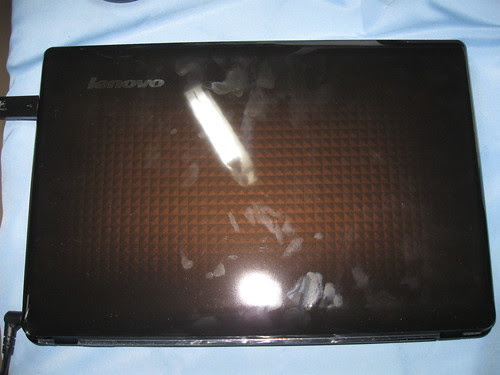 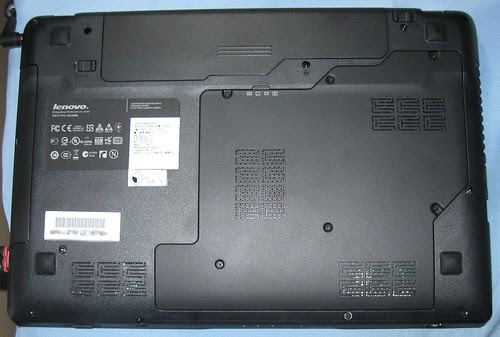 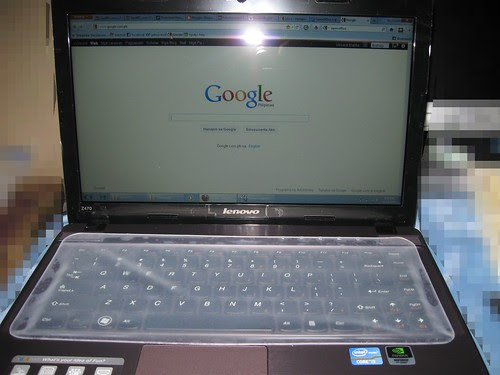 Keyboard has some space in between the keys. Typing is more better comfortable than some netbooks I tried since the keys have some space. Being Lenovo I would expect no less since they have a rep for good laptop keyboards. Sorry but I cant be more specific than that. It just feels OK typing and thats. My previous laptop was an old IBM thinkpad R51E.

Caps lock tends to get hit accidentally because of the tight spacing between it and the A key but I just set windows to beep whenever I press it. The home and pgup keys are close to the backspace and enter keys respectively so they sometimes get hit.

UPDATE: Another problem is that the DEL key is very small plus the DEL and BACKSPACE and HOME keys are very very close to one another. The problem with this is you might hit the HOME key by mistake and if you did not notice, you would start typing with the cursor moved to the start of the line. I never liked touchpads and this touchpad is no different. The pencil eraser like TrackPoint on my old IBM is much better. But I have to make do. I eventually turned off the function that interprets a tap on the touchpad as a left mouse click to reduce errors.  I havent fully explored the multitouch but so far, 2 fingertips going closer or farther from each other seems to just increase or decrease font size in firefox. I just re-use my old beat up logitech mouse. Its much more responsive than the trackpad.

The increase from 2 to 4 USB ports is welcome. Although they are only usb 2.0, thats an acceptable trade off for the price. The right rear usb port does sometimes interfere with the power cord. 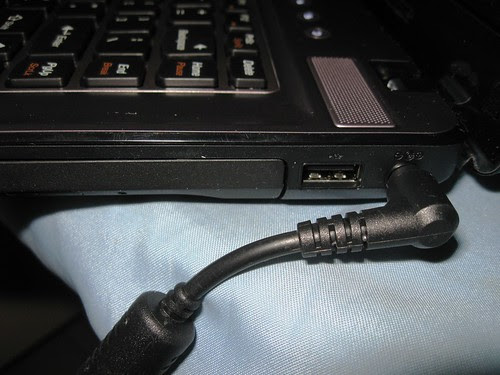 And while on the subject of the power cord, I have found out that the position of the power outlet plus the L-shape of the power  cord's end makes the cord more prone to fouling when picking up the laptop and repositioning it. My old laptop had a straight plug and the power port was on the back, out of the way.

Haven't tested the optical drive yet for burning but the ergonomics of the eject button is bad. Its hidden from view if you are above the laptop and it barely sticks out so it is difficult to feel with your fingers. To top it off, its a bit difficult to push. I can imagine sticking a piece of rubber on the button in the future.

The exhaust is on the left side. A quick test shows that the exhaust can get a bit uncomfortable specially if the laptop is working. Heat will eventually conduct through the plastic bottom and sometimes it might be too hot for your lap. However as long as you keep the intake ports clear and you do not load the laptop like running a CPU or GPU intensive app, the temp at the bottom of the laptop is acceptable.

Using the software PCwizard and Coretemp, and GPU-z, I measured the temps. Energy management mode was set to "balanced" and thermal management was set to "efficient thermal dissipation". All temps in degrees C. The laptop is placed on my table to ensure more or less OK airflow under the laptop

The bezel surrounding the screen sticks out a fraction of a millimeter on the right side of the screen so you can use your fingernail to raise it a bit. But this is only a small problem. This is the only thing I can see that reflects bad build quality, aside from the fingerprint magnet. No obvious scratches or poor workmanship. Then again, I'm no expert with regards to build quality, so don't take my word for it.

Lenovo has several drivers and software that make things easier. I'll go through some of them

Battery life is claimed to be 2-3 hours but I havent tried it yet. An interesting note is that the battery software can be told to optimize the charging profile for either battery life or battery health. If you choose battery life, then the battery will charge up to ~100%. If you choose health, the batt will only charge up to ~50%. This will decrease battery life to 1 hour using balanced or 1.5 hours using the power saver setting but since the battery is not stressed out, it will last longer before needing replacement. This setting is recommended if you mostly use the laptop while plugged in.

I did use the built in software to recalibrate the battery lifespan value, but I did not do any battery life benchmarks, so the above values are approximate.

On the left right front is a selector switch. Basically wifi on or off, although I'm not sure if bluetooth is included. On the right left front is the Optimus on/off switch.

Lenovo has something called onekey theatre. A button on the upper right controls it. Basically the settings are always off, always on and automatic or intelligent. Intelligent means the software decides when to turn it on or off. While off, the colors look a bit muted and light. while on the color and detail pops out.

I'm not gonna review the speakers. They are loud enough and quality is OK. I'm not that picky.

So to end part 1, I can say that the quality and value for money is quite good. I say 4/5 stars. But again, this is not a formal review and my requirements are not that high.

A future blog post will be part 2 of this review, benchmarks. So stay tuned!

My smart money card will expire at the end of the month, but I put in for a replacement. Actually, All I did was fall in line at the local Smart office and apply for a new one, only to discover that you can't do that unless the card is already expired. Since the expiration date is 11/11, it will still be valid until 12/11 or December 1, 2011

But later on I did receive a text message from Smart money saying that I will receive a replacement. I have no idea if this is automatic or it was triggered by my trying to have it replaced. If it is automatic, then kudos to smart for making things easy for the customer.

Today, its only November 9 but a 2Go letter arrived with my replacement card. Since this is a renewal of an expired card, I get the same card number. The only thing that changed is the expiration date and the CSC. The card came with a sticker that says call 15177 on your smart cellphone to activate. OK, I called and got it activated. Actually it was already active since its just a renewal. They then texted me the instructions.


OK I did that. Next I went to paypal to link my card. This procedure is much faster than with a new card.
After that you will recieve a text: Approval of Php 43.54 purchase at PAYPAL Merchant from card