Steve Jobs should have seen a doctor earlier

Steve Jobs should have seen a doctor earlier. 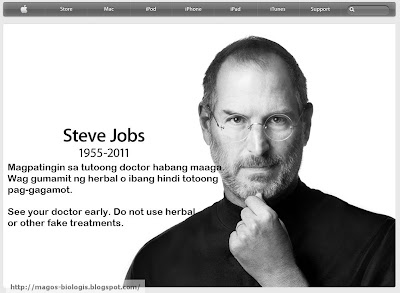 In mid-2004, Jobs announced to his employees that he had been diagnosed with a cancerous tumor in his pancreas.[111] The prognosis for pancreatic cancer is usually very poor; Jobs, however, stated that he had a rare, far less aggressive type known as islet cell neuroendocrine tumor.[111] After initially resisting the idea of conventional medical intervention and embarking on a special diet to thwart the disease, Jobs underwent a pancreaticoduodenectomy (or "Whipple procedure") in July 2004


This is a quick and dirty educational poster I made. The positioning of the text and the wording and translation was rushed but I think it gets the message across: Do not delay by trying out non proven treatments first, see your doctor early before the disease gets worse. The department of Health should use something like this in an educational campaign.

BTW: I am a surgeon in addition to being a tech geek and a blogger.