I have used CRT TV's all my life. Even now my TV is an old Sony CRT probably >10 years old. Since we got  cable television around 10 years ago, I have rejoiced in the freedom of many channels and have adopted a channel surfer's lifestyle. By channel surfing I mean I frequently just sit at the TV, pressing the next channel button on the remote control until I find a nice tv show. Although recently with the advent of the internet I could just look at the online TV schedule.

As an impatient channel surfer, I press the next channel button all the time. With my sony CRT tv, it takes a split second to change from one channel to another. Some of my relatives bought a cheaper model sharp 32 inch LCD tv. When I tried it I was disappointed because the time it takes for me to change the channel is appreciably longer than on my old CRT TV. I thought it was because this was a lesser known brand and/or a cheaper model. Unfortunately, I did not take any measurements. This can get annoying.

But then I was able to use a samsung 5 series 37 inch LCD TV in a 5 star hotel. It also has a delay when changing channels. With an unscientific test, 10 channel changes took 14-15 seconds. I'm no expert but samsung doesn't seem to be a lesser brand and a hotel wouldn't use cheap stuff.

This got me thinking. Is this delay an unintended consequence of LCD technology? Maybe it can be fixed if the TV manufacturers really wanted to. Maybe some people will get used to it. I don't know. But if you are a channel surfer and buying your first LCD tv, this benchmark might be nice to know. But as of now (I google around a bit), AFAIK, no one is talking about this problem so benchmarks like these might not exist.

Note: if you have a cable TV set top box, this issue is moot since the channel change speed is dependent on the set top box.
Posted by Vince at 9:41 PM No comments:

Hi. This is my review of mass effect 2 for the PC. First of all, I want to say that this is quite a good game. However its not perfect. There are traces of consolitis (it has a console heritage), a few bugs and other design choices that did not sit well with me. So I'll concentrate on the flaws mostly. Lots of other reviews have praised this game (which it deserves) so to be different and avoid repetition, lets concentrate on the flaws.
Update: I should have also mentioned that I'm concentrating on  the technical side so I wont cover the story, character development, etc.

I bought mass effect 2 (digital deluxe edition) from gamersgate at a good discount. I downloaded this game in bits and pieces over several months. A lot of the gamefiles are RAR files. This is actually a good choice since I can easily manipulate and peek into the install files. When I tried to install the game, the installation proceeded then unexpectedly stopped. I googled the error and found no help except to redownload the install files. I tried again and this time I watched the installer. There is a small status bar which shows which file is being processed. I found the file where it stopped. It was one of the RAR files. A big one, 2 gigs. I opened it in winrar and tested it and found an error. OK, no choice I need to re-download. Most likely before when I was downloading, the PC either hung, the net connection dropped or the power went out or something.

OK, I deleted the file and started the gamersgate download. I was dismayed when the progress bar of the download went all the way back to 20%. Thats ludicrous. The 2 gig file only comprises around 16% of the 12 gig download size. It should only go back to 84%. In the first case, it looks like gamersgate's download manager has no option to verify or test file integrity like most torrent clients and Steam and does not have the capability to download only one file. If one file is missing, a group of files are downloaded. OK, I re downloaded. Again there was a problem. This time I tested all the RAR files and found 2 files with errors, both greater than 1 gig, which failed testing. This time I did something different. I observed the subdirectory where the files are being downloaded and I noticed that the file I deleted first becomes a zero sized file then becomes larger and larger as the download progresses. After it is finished, the download manager then deletes another file and repeats the process. I now had a plan.

OK, this is how I avoided a lengthy re-download. First, I deleted the 2 files with errors then I copied the rest of the perfectly good files. I then started the download. The progress bar goes back to 20% and I wait till the 2 files are finished downloading. After the 2 files are finished, the download manager then deletes a third perfectly good file and starts downloading. I stop the download at this time. I copy over the backup of the third file. OK, now I have all the necessary files. I start the install process and it works.

Whew, thats a lot of work. OK to the game itself. Let me list down some of the flaws.   alot of them are related to consolitis.

If you import an old mass effect 1 save, the choices you made carry over. If you do not have an old ME1 save, the game makes some default choices for you which is a bit annoying for me since the default choice is not a 100% paragon choice and I prefer paragon.  But its an understandable compromise. There is a DLC, mass effect 2 genesis which allows you to make these choices, but its not free.

The intro movies cannot be skipped. This also applies to some FMV cutscenes specially the ones at the start of the game. The movies are BIK or Bink movies so you can get a BIK movie viewer and watch them and decide which you dont want then rename the files. Or you can google "mass effect 2 no intro" and download a mod which does it automatically

Loading takes too many steps. First you have to double click on the icon on the desktop, which brings up the menu. 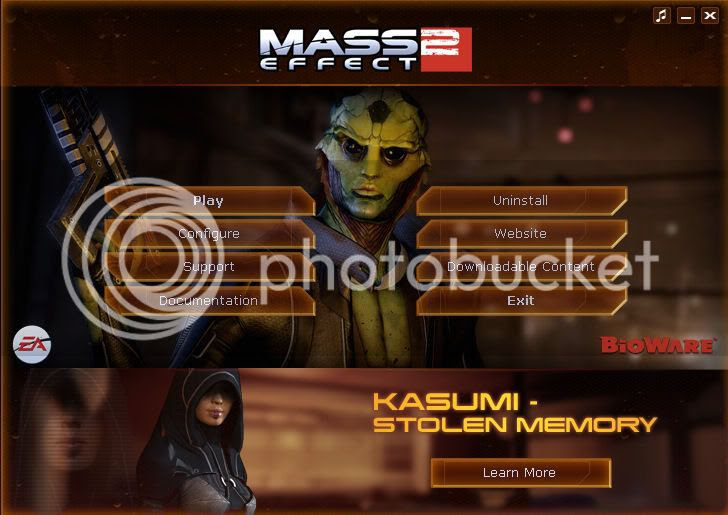 Then after the intro movies, you get a "press any key to continue page". At least it isnt "press start" to continue which would have been insulting to PC users. 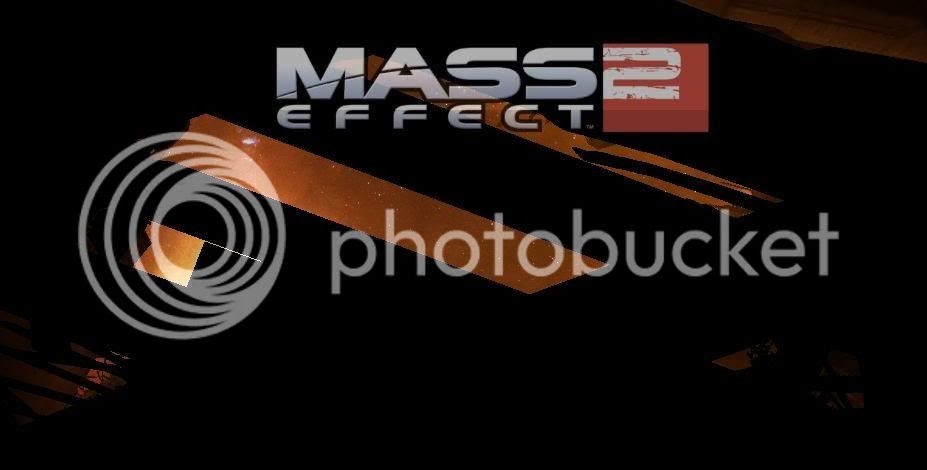 Next yo get to the main menu. But there's a little annoyance. Look at the pic below.

Initially the screen on the Left is blank, then 1-2 seconds later, the menu items Resume, new game, load game, extras and exit game appear. But if you try to click on them nothing happens. A few seconds later the new content available menu option appears and a few secodns later on the DVD like device on the right, a connect to cerebrus network button appears. Its kinda annoying that you have to wait for all of these to finish before any of the menu options work.

In the graphical options, the choices are pretty limited, also the fault of consolitis.

Saving a game is pretty fast but level loads and loading a game are slow. This is most pronouced when riding the elevator on the normandy. Fortunately, the normandy elevator bug is mostly fixed with the 1.02 patch but loads still take a fair amount of time.

A really big bug is that the spoken dialog and sound is sometimes delayed in some cutscenes. I've googled about this bug and it seems there is no fix out yet. I did try updating my pc's audio drivers but it did nothing.

Finally, I have an issue with the heavy weapons.  Most other weapons come in different versions which are well balanced and different advantages and disadvantages like balancing rate of fire with accuracy and damage per shot. But for heavy weapons, the mechanics of some of the weapons suck. Firing should be simple, click left button and boom. With some of them, click the left button and nothing happens. You got to HOLD the left button, wait for it to charge up and then release. Good luck if you get hit by enemy fire while waiting for the weapon to charge up.

Ammo for heavy weapons is also scarce. This can translate to only 1 or 2 shots for the nuke.

Level design is slightly linear for missions. Although outside of missions you can go pretty much anywhere.

The run and take cover button is the same, the space bar. Guess what happens if you are standing with cover in fornt of you and an enemy firing at your back. You press space bar and try to run but instead you crouch in front of the barrier, still taking fire.

Ok thats it. Let me repeat, this is a great game but it isnt perfect. I'm just focusing on the flaws.


update: OK a couple of people in the comments were asking (not politely) why I needed to describe my troubles downloading the game. Well, the problems showed up a flaw in gamersgate's download manager, the inability to download only one file. I'm sure I won't be the only person in the world who would experience problems like this. I'm merely sharing my workaround which avoided wasting bandwidth re downloading several gigs worth of perfectly good files. Don't you think thats knowledge worth sharing? Not everybody has a fast net connection and some people have download caps.

update: some people have suggested that this is not a review. That suggestion has merit. Maybe I should call it a "list of bugs" or something. Anyway, in the end, its possible that someone may learn from the mistakes and bugs I've pointed out here.
Posted by Vince at 1:24 PM 4 comments: