The seagate momentus XT is a hybrid hard drive. I needed more disk space and I was torn between buying a SSD or a hybrid. A 80 gig SSD costs around PHP 9000+ in the philippines and this 500 gig momentus XT only costs PHP 6150 - PHP 6500. I bought it for PHP 6150 at the store in gilmore called PC-Options. Sorry but they dont have a website. This is their website. I decided against a normal hard drive since I wanted to see if I could reduce loading time in games. This, aside from the lack of space was my primary objective.

Since an SSD is pricey and I needed the space, I opted for the hybrid hard drive. Right then I knew this was a gamble since I'm betting on the cache making a big difference. And I know that the 2.5 inch form factor, even at 7200rpm, might make uncached reads and writes slower.

PC-options is a no frills store with a reputation for long lines, low prices, a top secret price list, and a large and up to date selection of items. By up to date I mean if something new is released, you can find it there sooner than some stores. I'm a frequent shopper there. By top secret I mean top secret. They dont give away copies and you are prohibited from taking a picture of the list with a cellphone camera. Its printed on paper taped to the counter right in front of the employees. You could use a spycam though.

The momentusXT that I bought happened to be the only one thay had. It was on display. Living up to its low cost and no frills reputation, the drive came in a sealed antistatic bag which they opened in front of me to put the warranty sticker. They then wrapped it in bubble wrap and placed it in a plastic food box. Hey, helps keep costs down and it works, so I have no problem. The food box looks like this.

I asked them if they would order any replacement inventory and they couldnt say. Oh well.

Before plugging in the momentusXT, I ran a few real world tests on my PC. Several passes of booting and shutting down and loading times for the game Borderlands, steam version. I then installed the hard drive. You'll see the results later.

Using seagate discwizard, I was able to format and allocate a partition. Unfortunately something went wrong when attempting to clone the 320 gig drive. I set it up, discwizard prepares the drive and says I have to reboot. After the reboot, nothing happens. Tried it again, nothing. Ok, I downloaded a few freeware disc cloners. I tried one (I have since deleted it and I forgot the name). Step one was to copy all the files from the 320 gig to the momentus. OK. I screwed up step 2, which was to make the momentus bootable by copying something, MBR or boot sector or whatever. When the program wanted to reboot, I rebooted and set the BIOS to boot from the momentus, I get a NTLDR missing or something like that error after the POST, press CTRL + ALT + DEL to continue. Set bios to boot from the 320 gig, same thing. Ohhhhkayyy. This is going to be harder and the comparison will be less valid. I eventually ended up re-installling my OS. To make sure I get it right, both the 320 and 80 gig were unplugged until the windows OS was installed. Fortunately, no files were lost on either drive, and I got backups anyway.

This makes the comparison less valid because
Ideally I should have cloned the OS on both drives and run the tests with only one Hard drive  installed. But It takes a long time.

Once I more or less got the OS and programs installed, I then proceeded to do more real world and synthetic tests. So all other tests were done with the OS installed on the momentus XT

NOTE: all graphs have the exact values shown. 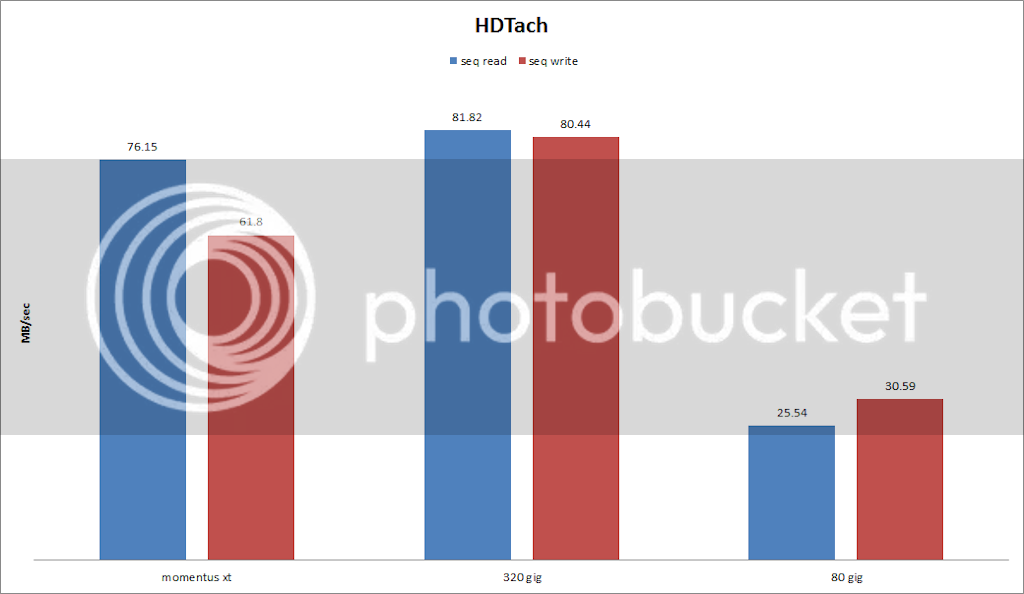 The read speed is slightly slower than the 320gig and the write speed is slower. I am assuming that this does not take into account the cache, its expected. Lets try another one, hdtune pro 4.6 trial. Here you can see the maximum and average transfer rates are actually faster than the 320 gig. Burst speeds are close. Its interesting that the access time dropped to very impressive levels at the second pass. This is the cache at work.

First impressions. The write speed is slow. I didnt use a stopwatch  but installing programs to the momentus XT either from another hard drive or from DVD seemed slower. Also if the momentus was busy either reading or writing a large file/s the PC became slow and unresponsive. Like if you scroll down or type a letter maybe half of the time there's a 1-2 second delay. With the other 2 hard drives busy, I did not notice any slowdowns. This would be an acceptable trade off since you rarely install or copy large files.

With the drives idle, sometimes there are also pauses and slowdowns, however this only seems to happen with firefox, not notepad, internet explorer or other programs. So it looks to be unrelated.

OK, with the conflicting results of synthetic benchmarks, lets do real world benchmarks. For the first one its windows boot and shutdown. Internet was off for the tests. I use a boot manager called soluto. I use it to remove or delay unnecessary startup programs. In this case, no programs were delayed, all delayed programs were reinstated. Tests were done with windows on the 320 gig drive and with windows re-installed on the momentus XT. Although soluto can measure the boot time, it is not 100% accurate, probably because the POST is not included. So values were measured with a stopwatch from pressing the power button on the case to when the hard drive light dies. I tried to re-create the old installation as much as possible but since cloning my OS was not successful, there are differences. So consider these results with a grain of salt. I re-did the tests 4 days later after installing more programs.

With the 320 gig HD I used the trial version of the cache program Eboostr. For the first set of data labeled "2 caches", I used 4 gig caches on a flash drive and on the 80 gig hard drive. The next set of data called "FD cache" uses eboostr and a 4 gig flash drive. Last was with eboostr loaded but no cache drives. All results with the momentus XT use no eboostr or readyboost caches.

Results for booting are consistent. From pass 1 to later passes, most values go down. This is due to the action of the various caches (eboostr, superfetch, and the momentusXT's own cache). Using the 80 gig as an ebooster cache has a detrimental effect compared to using only the flash drive but it still better than using no cache. This is expected as my 80 gig hard drive is slow. The momentus XT was slightly faster in booting, even 4 days later, once the cache kicks in.

For shutdown, values are very close. The momentus is slightly faster at first but 4 days later, it lags. not sure why, maybe some programs I have installed.

Next lets try borderlands. Again, I had to re-install my OS in between the tests on the 320 gig and the moementus XT. Internet was off. Steam was on in offline mode and borderlands had the intro videos disabled. I measured the time from clicking on the desktop icon to the (press enter) on the main menu and the time from the main menu to loading a checkpoint. The checkpoint is the very first checkpoint for a new game, the one where you meet the robot claptrap for the first time. I rebooted after each pass. Again, I re did the tests 4 days later.

For the 320gig, the start borderlands times are very similar with and without the caches. An aberration is an abnormally long second pass with 2 caches. With the momentus XT, its consistently slightly faster once the cache kicks in. The load checkpoint times for both drives are very close.

Next lets try winrar. This includes write tests, unlike boot and borderlands which are primarily read tests. I used an identical 1.1 gig RAR file on both the momentus and the 320 gig. "Test" means opening the file in winrar and using winrar's test function. "Scan" means scanning the file from the right click menu using Avast virus scan free. Extract means extracting the file to the same directory. This last test is more of a write test This time I did not reboot between passes to give the cache a chance to work. 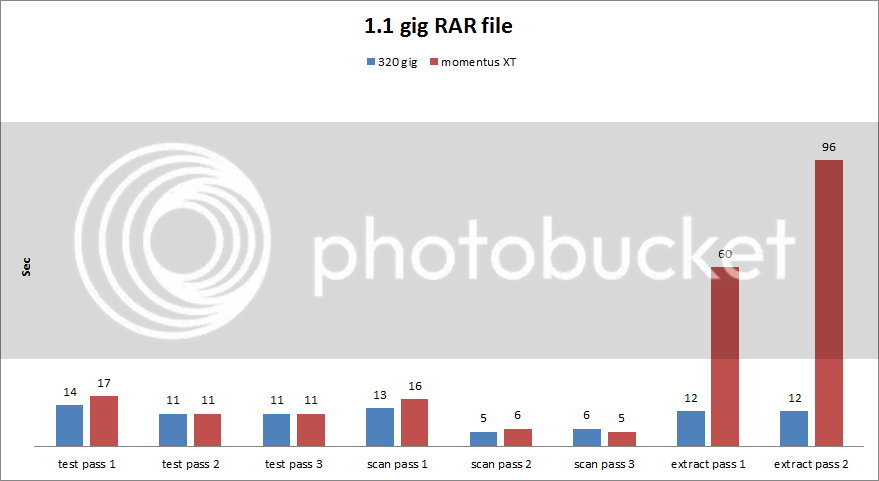 With both drives, the read tests become faster after the first pass. This probably represents a cache at work. Probably a windows cache since I have a lot of ram. For pass 1, the momentus is slightly slower but at pass 2 or 3, both drives are neck and neck. The last test, the write test, shows the momentus significantly slower since the momentus's cache is for read.

Lets try something BIG. Copy 7 gigs (mostly a few multi gig files) from the 80 gig to both drives. I rebooted in between each test. Only 1 pass since the 7 gigs  is significantly larger than either the momentus's cache or my ram. This way we see raw uncached write performance. I use the program teracopy. It has a log that shows the time used and the average MB/sec speed. 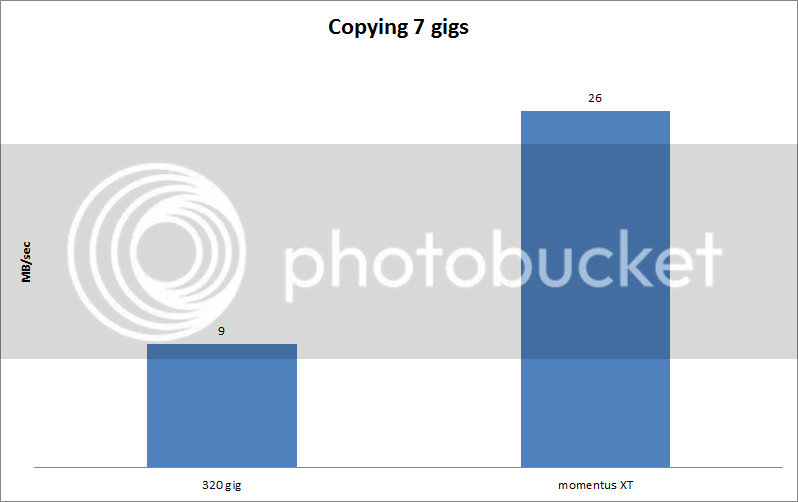 Significantly slower. Expected since its a 2.5 inch drive and the cache is a read cache which does not come into play so writing will be slower.

This is tedious and boring work. Fortunately I can do something else while waiting. I watch TV or use my laptop.

Read performance is slightly faster than my old hard drive if you let the cache do its work.Emphasis on "slightly". I was not expecting significant gains since this is not a SSD. I give it a 4/5 stars. But write performance is bad. I give it 2/5 stars. On average that's 3/5 stars.

So was it worth it? Thats a hard call to make since there is a small benefit.. Right now I cannot recommend this product unless maybe for a laptop that has an existing SATA drive that is much slower than my 320 gig. The slow write performance causes a lot of pauses during normal operation. I could try more tweaks like moving the swap file or the windows TEMP directory to the 320 gig. Anyway I took the risk and I'll have to live with it. Maybe when I get a new laptop I'll use it there.If you have the money and dont need disk space, a SSD is the way to go if you want significant speed increases.

the end
Posted by Vince at 4:13 PM No comments: